Our experiments in following strangers and what we did with it…

We started 2015 knowing we wanted to follow people in the street. Both of us had had a revelation the previous autumn, when we were in Belgrade at the B_Tour festival and participated in Miloš Tomić’s Unknown Lover tour. Unknown Lover consisted of a series of tasks to be undertaken individually or in pairs/groups, and one of the tasks was to spend 10 minutes following a stranger wherever they went, taking a single photograph of them. We took the tour separately and only came together to talk about it much later – and we discovered that we had both loved this particular task and spent longer on it than the stipulated 10 minutes. The appeal was something to do with the way it takes decision-making out of your hands, forcing you to go further than you would otherwise, along routes you might not choose to follow. It has (or can have) a cinematic quality: focusing on the movement of a figure through the streetscape, a stranger who is mysterious by default as you really know nothing about them. It also has the qualities of a game, in which you have to stay far enough away not to be detected but not so far that you lose them, thus engaging in the substance of the city by challenging you to negotiate all its obstacles from traffic to distractions.

This became one of our main preoccupations in the first six months of the year. We looked at other artists who had used Following in their work – particularly Sophie Calle, and her Suite Venitienne and The Shadow,
Francis Alÿs’s Doppelgänger and Vito Acconci’s Following Piece. We began our own series of experiments in Following, and in the first two of our workshops (or walkshops) at SPACE@ClarenceMews we enlisted friends and fellow artists in our explorations*.

We thought about who is followed, watched or surveilled. Celebrities (one of our walkshop participants talked about spotting Beyoncé in Selfridges and following her through the store); criminals, dissidents, terrorists or people suspected to be any of those (a couple of walkshop participants had been stopped by police or security men who had been watching them because they were “behaving suspiciously” or matched the description of a wanted criminal); people who stand out as beautiful, flamboyant, odd or out of place. Also those who are desired, with the watching/following behaviour on a spectrum of mild interest right through to downright psychotic. Who does the surveillance, watching and following? Paparazzi, reporters, spies, secret police, ordinary police, private detectives, controlling lovers, would-be lovers and vengeful ex-lovers, curious and bored game-players …

Looking at these lists, our desire to follow people began to seem a little questionable. But it was nevertheless a real desire, and we got a genuine pleasure from doing it, as did most of our walkshop participants. In exploring this pleasure we discovered other possibilities within it. For instance, an hour spent following various strangers coming and going from a main station (King’s Cross in London) became a choreographic exercise, requiring fast switches between different paces and ways of walking; repeating and re-repeating short looping routes between trains and buses and hotels and buses and trains and becoming aware of the pattern made by the pathways through a public space and the different ways of taking them.

Continued attempts to follow and photograph strangers drove home the taboo nature of the task and the small thrill of breaking that taboo. The feeling of accomplishment when you manage to follow someone all the way from their workplace to their front door (or vice versa), or get up close enough to them to overhear their conversation without being noticed – this went along with a bristle of discomfort at invading their privacy or imposing your own fantasies upon them.

The more research we did, the more we discovered in the practice and its shifting power relationships. We were blithely pursuing strangers around London, observing their movements, photographing them and commenting on their behaviour when discussing our “follows” afterwards. And they were oblivious – unaware that we were using them for our research and hence of course lacking in consent to such involvement.

The world (the city) can quickly become a stage or a cinema screen onto which the follower projects their stories. The followed are the performers; after a while it’s easy to start seeing them as dramatic characters, there for your watching pleasure. But equally often you are at their mercy (albeit because you have put yourself there) and must dawdle or run, walk yet again down that long boring road or put on an elaborate show of stopping to send a text or take a call … Once you commit to following someone, it can seem as if they have all the power. You wish they would surprise you, or do something more interesting; take a different route or walk faster, or slower. And sometimes their story is so absorbing that you forget other plans and follow them all day, held by the attraction of your unwitting guide.

Something that arose in our workshops – which makes Calle’s work in both Suite Venitienne and The Shadow particularly interesting – is how far gender influences feelings around following and being followed, and experiences of power and control in the context. Most of our workshop participants were female and almost all had stories to tell of being followed by strange men, or fearing being followed by strange men; whereas men (our sensitive feminist male friends, at any rate!) were more likely to talk about being aware of those fears and making an ­effort to avoid being mistaken for someone following a strange woman when they just happened to be walking in the same direction. (This would come up again when we did Shadow in Berlin, when at least two men reported the fear that passers-by were judging their following behaviour as creepy and sinister.)

Could we make work that addressed these questions? We were determined to return to the B_Tour festival in 2015 as it taking part in it in 2014 had had such a huge impact on us and our work. Building a piece around the act of following seemed a logical step and we developed the idea for Shadow, a performative piece that gives its participants, one by one, the experience of following and being followed. We considered performing it in Lichtenberg area of Berlin, where the former Stasi headquarters were (now a museum), but rejected that on the basis that it seemed too heavy-handed. Instead we chose to do it in Neukölln, an area that is not unlike the Hackney/Dalston part of London in that it mixes traditional working class inhabitants with newer immigrant communities and arty/hipster incomers. With the idea of Edgar Allen Poe’s man in the crowd and Walter Benjamin’s Arcades Project, we decided to take a route that circled Neukölln Arcaden, a shopping centre that could be seen as the contemporary (and somewhat downmarket) equivalent of the 19th-century Paris arcades. Having researched the piece in Dalston, we found a similar sort of route that included narrow alleys, open squares, a crowded main street and a quiet cemetery. The idea was to use the choreographic and visual/cinematic potential of the following exercise, leading the follower through a variety of contrasting spaces and atmospheres.

At the same time, when we listened to the recordings we’d made of our walkshop meetings we decided that the material we were gathering would make the basis for an intriguing audio tour. An early attempt at this failed completely; it aimed to take listeners on the trail of an imaginary stranger made up of a composite of some of the strangers we had followed failed and the routes they had taken – but this proved both too ambitious and too complex. We ended up making Follow Me, a sketch/scratch piece that combined elements of binary audio recording in Hackney, extracts from our recordings of walkshop participants’ following experiences and a scripted thread of suggestions, instructions and ideas in an audio walk that encourages/tempts participants to follow a stranger as they listen. 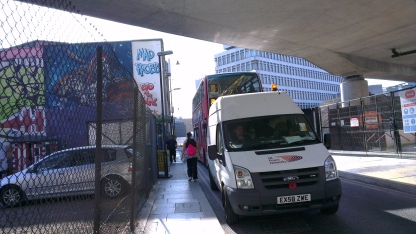 Feedback from participants in both Shadow and Follow Me suggested that inviting people to perform the action of Following in a more formal framework went a long way to remove the anxiety and discomfort some of our walkshop participants had felt.

In Shadow, they knew they were following a performer, not a random stranger; the surprise was to discover that they themselves were being followed. Surprisingly, only one participant followed the “stranger” very obviously, a few feet behind them; everyone else tried to remain hidden from the person they were following, although we hadn’t told them to do so. Most people were surprised but interested that we had followed, observed and photographed them (the piece ends with a sharing of our observations, followed by emailing them the “surveillance” photos); many of the participants were from Berlin but no one seemed to notice any resonance of surveillance from the days of the GDR, although this wasn’t something we brought up. We’d been warned by friends who had lived in the city that Berliners were far more concerned with privacy and would not like being photographed or seeing other people photographed, but we didn’t experience this at all – not sure whether this is because of the area’s hipster quotient or the recent impact of selfies/Instagram/Facebook etc in making people in general around the world more used to the constant background hum of street photography. We were left unsure whether the piece had sanitised and diluted the Following experience so far that it became no more than a mildly diverting game, and we’re still mulling over what we learned from it and how (or whether) to take it further.

Participants in Follow Me, on the other hand, actually followed “genuine” strangers; however they had a voice in their ear to give them permission. They spoke with enthusiasm about how they had felt safe enough to take risks and go further in following people. The relatively brief scratch piece (about 20-25 minutes) provoked a lot of discussion and thought about the experience as well as recollections by a couple of participants who had done it as a game when they were children. We’re hoping to make extended versions of Follow Me for other sites and other cities.

The next stage in our investigations will take us to Warrington in October for a workshop run by Simon Farid, which looks exciting. Will update about this in the autumn.