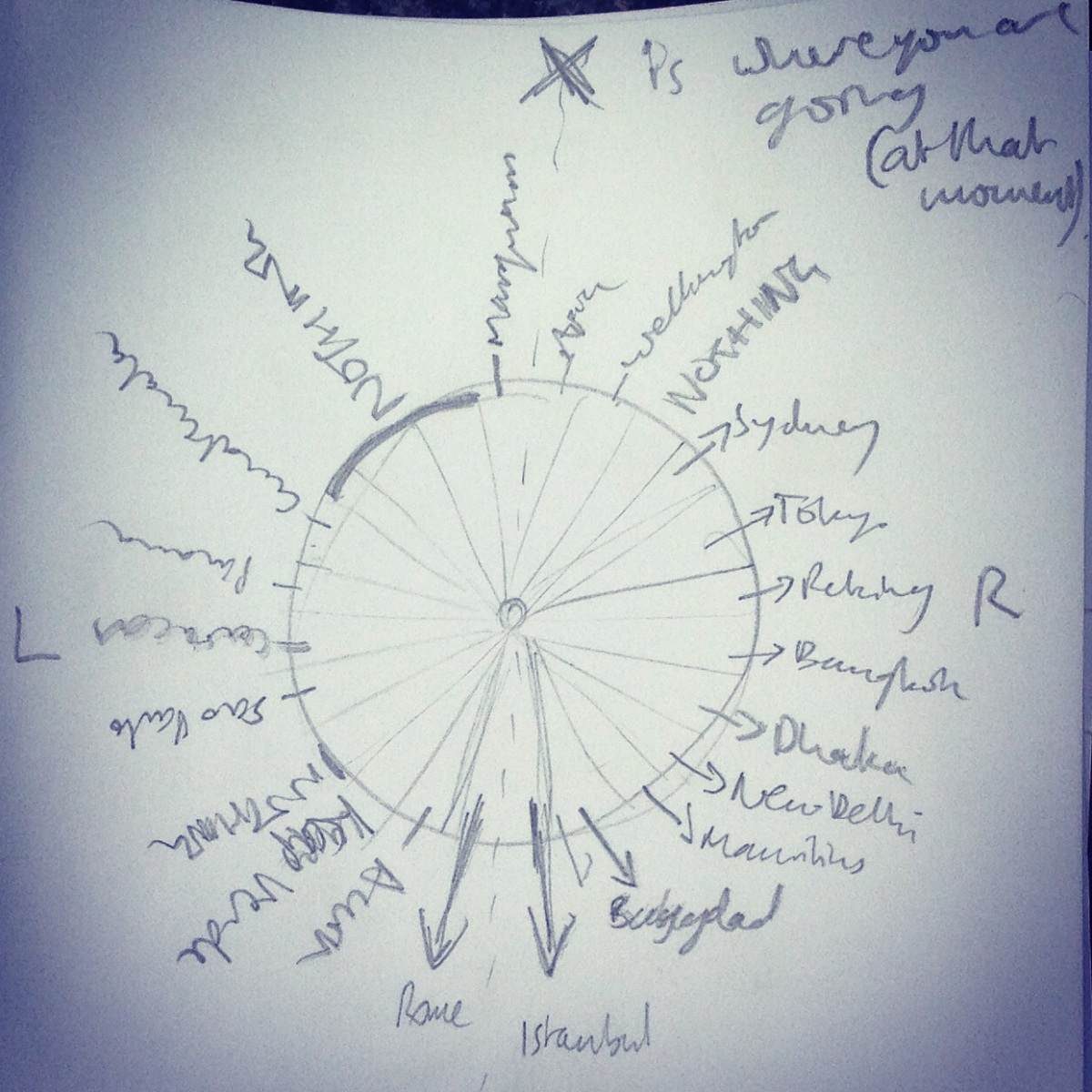 ] You will be walking around the city alone – this tour aims to find out the different ways in which different people explore the city, and it involves an encounter – and an exchange – between two strangers. Bring a notebook to write on (or some paper) and a pen or pencil – that’s all you’ll need. [

– from instructions to I’m A Stranger Berlin / Belgrade

I’m A Stranger is a piece we devised for B_Tour, a festival of alternative art tours which began in Berlin in 2013 and branched out to Belgrade in 2014. (In 2015 we’re planning to do it in London, and possibly Glasgow and elsewhere.) While we were talking to other tour-makers at the festival, we came up with a description for it as a make-it-yourself tour – it’s a participatory work in which participants make their own tour and create a map of it in part one, then take a tour that someone else has mapped.

The great (and sometimes scary) thing about participatory work is that you can’t predict what participants will do, and how they will interpret and influence it. Working on the streets of a city contributes more elements of randomness, and the piece takes on its own life, growing up and away from the intentions and designs of its creators… We are learning more about this process as we go, trying to lay down starting points, rules and tasks that will generate something interesting and rich, and trying our best to let go of our preconceptions about how that will turn out. The versions of I’m A Stranger we’ve done so far have turned out rather differently to our plans – and have been quite different from our initial idea.

When we started thinking about I’m A Stranger we wanted simply to arrange a (rather mysterious) rendezvous between two strangers; when they met, they would exchange the routes each one had taken to arrive at that point, and each would follow the other’s route in reverse to find out where they started. The first part would involve working out a path through the city from home/hotel/arrival point to the city centre; the second part would be an adventure of following a stranger’s route in reverse and it could take all day, depending on the length of the route, how easy it was to follow, getting lost etc. Along the way the separate participants might discover a part of the city they had never seen or would see it from a different point of view to their usual one. Perhaps they would arrive feeling a little as if they had walked into the life of the stranger. This idea was more like a walking protocol or strategy that could be set to be taken at any time, all we would do is put two strangers together and arrange the rendezvous; if they shared their reports of the experience it would be online rather than in person.

There are possibilities in this simple version that we have still to explore, but when we decided to pitch I’m A Stranger for B_Tour we realised we would need to make it work in the context of the festival, and it became something quite different. For the B_Tour version we came up with something time-limited and more contained, which could work for a number of individuals paired at random depending on who reaches the rendezvous point first. We discussed it with B_Tour’s Christin and Yael and tested variations in London in the first few months of the year, which pointed up the potential problems and challenges and helped us clarify what sort of experience we wanted to explore. 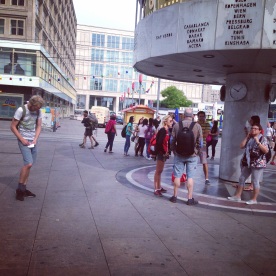 Starting point in Berlin – the world time clock on Alexanderplatz 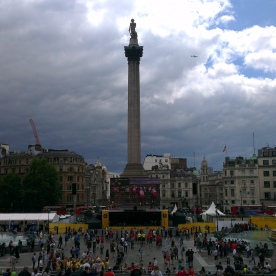 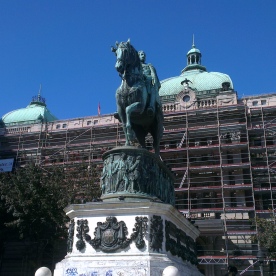 The initial inspiration had come from thinking about the characteristics of the city – as a place where strangers meet and exchange things (goods, services, ideas); and as a place where people arriving in the city have to negotiate routes through unknown streets. At one stage we wanted people to travel symbolically from a given entry point to the city such as a main railway station (in Berlin we were going to start at Ostbahnhof, which had been the main station of East Berlin and was now the city’s second most important station) to a rendezvous at a well-known symbolic meeting point (in Berlin, the Fountain of International Friendship in Alexanderplatz; in Belgrade, the statue of Prince Mihailo Obrenovic in Trg Republike).

Testing I’m A Stranger in London (at Waterloo and St Pancras stations), we discovered that time pressures limited the number of ways you could get from one point to another, as well as constricting the amount of time you could spend recording your route. What’s more, after the exchange, participants had to follow their new route backwards – from the meeting point to the starting point – which added an extra layer of complication.

The solution we came up with was to ask participants to take an hour to walk a very short route – from one landmark to another – which meant they could vary the route and the amount of detail they recorded as much as they liked. In Berlin, for example, the starting point became the World Time Clock in Alexanderplatz; the Fountain of International Friendship is just across the square and you can see the top of its sculpture over the tangle of market stalls in between. This also meant participants no longer needed to work backwards along the route they had been given at the exchange – they could return to the starting point in a few seconds in order to set off again.

While we lost a symbolic dimension of the journey from the city’s periphery to its centre, we regained the ability to give our participants a great degree of freedom, both in how they made a pathway and how much time and detail they used to record it. With an hour to spend crossing a space of less than 50 metres, they could make a route that zig-zagged across the square, looped through the backstreets around it or simply went very, very slowly in as direct a line as possible and included every detail. The only fixed points were the starting time and place, the rendezvous time and place, and the final ending time and place.

They were equally free to record their journey in any way they liked – by writing down, drawing or mapping the route they took, what they saw or what they heard, or any combination of writing/mapping/drawing any or all of these. So the work generated a host of different alternative “maps” – routes participants had made and their records of those routes which could (in theory) be kept as documentation, as works in their own right and as directions for future walks.

At the rendezvous, the participants – the strangers – recognised each other by writing “I’m a stranger” on a piece of paper and holding it up, and these in turn became an effective visual part of the work. It was interesting to see how many people felt awkward doing this and wrote it in quite small letters and/or held it up as inconspicuously as possible. Others didn’t make a sign at all, but relied on finding someone else’s first. 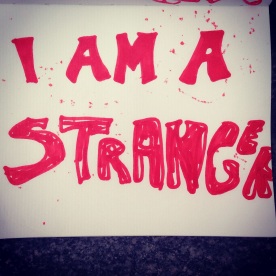 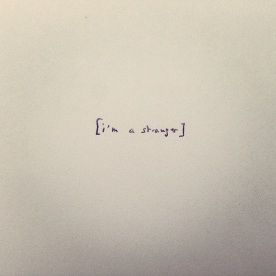 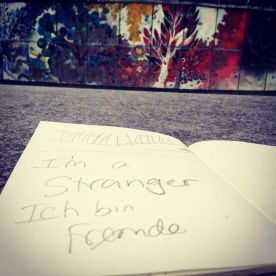 This structure of journeys and exchanges culminated in a final exchange – a sharing of experience between each pair of strangers who had exchanged routes and a general sharing for those who wanted it. We hadn’t really thought about this when we started out (it was something B_Tour were very keen for us to have) but it ended up seeming like a completely logical outcome of the exercise. During the Demolition Project piece that gave us our name we had discovered that one of the most rewarding parts was that it opened up conversations between those who participated, sometimes along unexpected lines. The delicate task for us (we’re still trying to get it right) is how to facilitate those conversations without forcing them. In many cases, people who had exchanged routes were really keen to talk to each other about what they’d discovered or found puzzling on each other’s maps. Sometimes people found unexpected connections in the way they perceived the world – for example, a couple of participants paired by chance in Belgrade had both focused on the soundscape of their routes. Others made fresh discoveries – one participant in Berlin who worked in Alexanderplatz found the route showing him parts of the area he had never noticed before; others who knew and disliked Alexanderplatz for its superficial ugliness discovered how interesting it could be once they started using details as landmarks.

Repeating I’m A Stranger in Belgrade brought a fresh challenge on the second day, when a planned demonstration in the city centre meant Trg Republike was filled with riot police and we had to relocate at short notice. This turned out to be a bonus as we found a fresh site, with a starting and meeting point at different doors to the Bitef Theatre, which is next to the busy Bajloni market amid a tangle of small streets in the Dorcol area of the city.

The marketplace setting gave the tour a different feel – less “touristic” and with a background as a place of outsiders and exchange. Bajloni is especially interesting as it has a mix of official stallholders within the gated market and unofficial street sellers with makeshift displays spread on the surrounding pavements; we were told they are illegal migrants and gypsies who have come to Belgrade from the country.

The necessity of having to move away from the “obvious” meeting place made us rethink the type of site we want to stage our next outing of I’m A Stranger.

Another thing we discovered was the difficulty of documenting the piece without a third and fourth person to run round after participants, ensure they agree to us photographing and reproducing their routes and comments etc. It made us consider how we document our work – and whether that’s important. There’s enormous pressure for artists to document participatory and performance work thoroughly in order to have something to show potential funders and commissioners, to market themselves with and to give something transient a more permanent life. 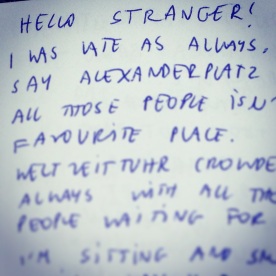 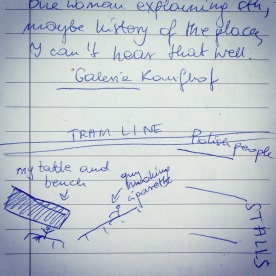 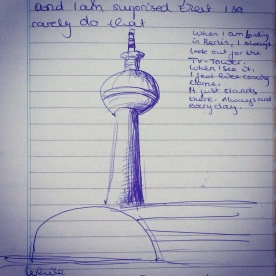 Maps from I’m A Stranger in Alexanderplatz

At the same time, what seems really important to us is the actual encounters at the heart of it: in the case of I’m A Stranger, the encounter with another person’s pathway, with another person’s way of perceiving the urban environment – and of course the encounter between self and city. We are very interested in the physical product of I’m A Stranger – the route “maps” – but it proved harder than we thought to capture these: it was difficult to photograph them on the spot (bad light, stiff breezes) and people understandably wanted to keep their maps or hold on to the map of their opposite number.

The issue of documentation is one that we really need to sort out in the coming year: how we approach it in principle, and how we make it practically. Is it a prompt for an experience (eg walking protocols such as those of Wilfried Hou Je Bek) or is it a trace or a record of it, or are experience and documentation part and parcel of the same work? On the one hand, there is a lot of depressingly dull documentation of walking art which seems beside the point; on the other, there is work where the record/trace seems to be the work itself, from Richard Long’s Line Made By Walking onwards. With I’m A Stranger we hope to build up documentation that has multiple uses – as traces of pathways actually made, as routes that can be attempted by others at a later date, and as a set of rules that will enable anyone to reproduce it in any city.