Exploring refrains for uncertainly sacred spaces, or a report on walking as imaginative adventure

The other day I went for a walk in Hanley, Stoke-on-Trent. It’s quite a long way to go just for a walk (about two and a half hours on the train) but there were at least two things that made it worthwhile: it was part of the events around AirSpace Gallery’s Walking Encyclopaedia exhibition which I wanted to see, and it was led by Phil Smith, artist/writer/performer and progenitor of Mythogeography, which is like psychogeography but also quite different (have a rummage in the capacious and inspiring website to find out more).

The walk, titled Refrains for Uncertainly Sacred Spaces, started at AirSpace, a warm and welcoming artist-run gallery whose Glen Stoker came with us on the walk armed with a video camera. The Walking Encyclopaedia exhibition, which includes Tim Knowles’ solo show, Paths of Variable Resistance, ends on 15th March but I hope it will be archived for future reference at the end rather than dispersed – it’s a dense and wide-ranging collection of documentation of “walking as a cultural practice” by contemporary artists, including artist books, leaflets, instructions, videos, photos etc. There’s also a blog to accompany it.

Before we set out, Phil introduced the walk by talking a little about his current interest in privacy and exposure, and also describing the afternoon as an experiment – so if things didn’t quite work that would also useful. There were about 20 of us – a strange and interesting mix of people, some of us shod for a cross-country hike (me) and others who knew or guessed it wouldn’t be quite so arduous. In fact, we never strayed very far from the gallery – the walk proved to be a detailed exploration of the “uncertainly sacred spaces” all around us, and a strenuous workout for the imagination rather than the leg muscles.

Those spaces included a patch of wasteland that was once a cinema, the arches leading to Tesco’s car park, some peculiar flower beds seemingly modelled on an altar for human sacrifice, unmonumented plinths in a former graveyard, cryptic marks on a wall, a Methodist chapel suspended in aspic-dust halfway between ruin and restoration, and the empty stage of the Regent cinema. We also walked very slowly around the Richard Long exhibition in the Potteries Museum, trying to get in touch with the spirits of the architects behind the 1960s building, and we clustered into a pedestrian horse outside the horseshoe-shaped doorway of a legal chambers. Along the way we cast health and safety to the wind, climbing over hillocks and holes and broken floors and risking arrest (or drawing attention) by quietly looking for things to steal, committing tiny acts of arson or disguising ourselves in black masks (our own personal patches of darkness)…

This was walking as an imaginative adventure, full of suggestions to look harder at the urban furniture we take for granted and invitations to create fictions for ourselves, whether projecting a memory of darkness onto an imagined blank screen or stealing words from a derelict space. Some parts worked better for me than others – I was quite shocked that I felt a deep resistance to the idea of desecrating a chapel with sneak-thiefery, even if it was a symbolic rather than a real crime. On the other hand, walking round with a secret piece of darkness in my pocket was deeply appealing and the idea of later using that darkness (a small patch of cloth) as a veil of privacy had resonances I’m still pondering. Geographically, we covered a very small patch of ground but that meant we had time to explore it in detail within the various fictional frames that Phil suggested and supported with small invented (or excavated) rituals. What was on offer was a different way of seeing and relating to the everyday, a way to access something hidden beneath the skin of the banal. 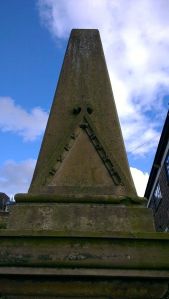 I have vague feelings of discomfort around the idea of walking as art, or as a “cultural practice”. For one thing, it seems extraordinarily pretentious to anyone not involved with the art world to label as art an activity as basic and commonplace as eating or urinating. But this is also something I find exciting – it has the capacity to tread that invisible line at the border of art and the everyday, to explore that line and perhaps to blur it.

It can be participatory, pleasurable and potentially open to everyone; or private, esoteric and difficult, available to only the initiated. Or anything between these two. It can be an ongoing project that anyone can pick up and practise for themselves, or a one-off, unrepeatable event only thoroughly experienced by the artist, with the audience allowed crumbs from the table – fragments of documentation or recollection held captive in a stark white gallery far from the action. Either way, it doesn’t easily produce something that can be collected by oligarchs or sold at Sotheby’s for headline-making sums.

Perhaps the obstacle is the label – is it possible to just think of this activity as walking? What is the distinction between undertaking an “art walk” and simply using one’s feet to get around or go for a hike or take an old-school guided tour? All of these walks can have varying degrees of structure and direction. I think the artist’s walk might tend to have the intention of affecting the participant or the audience in some way, whether by involving them in an unusual activity or shifting the way they perceive and process the world. This was certainly true of Phil Smith’s walk, at least for me.

But it can be quite a subtle distinction. Ben Waddington, talking about his current festival of guided tours in Birmingham, says “The Still Walking outlook is that everything around us is worth looking at, thinking about and talking about” – which seems to make that vital connection between walking as a popular pastime and the aims of types of participatory art – does there really have to be a big gap between walking art participant and someone who takes a country walk to look at the landscape or who goes on a tour to learn about the history of a place? But of course, framing a walk as art allows you to apply for a grant or use it as research material for a PhD, which is quite another matter; it can also alienate people who would otherwise engage with and enjoy the experience.

I don’t have a clear answer at the moment. Any comments would be appreciated.

• Walk On “From Richard Long to Janet Cardiff – 40 years of art walking”, an exhibition at Mac arts centre in Birmingham until 30 March 2014